Built during the 18th century, Abbasi House of Kashan, also referred to as the Abbassian House (Khaneh Abbassian), is the most distinguished example of traditional Persian architecture in all of Iran.

Boasting a magnificent array of decoration, design and architectural integrity, the Abbasi house leaves a very tight spot for rivals. It’s no wonder that it is currently a nominee for recognition as the ‘most beautiful residential building in all of Iran’!

According to goingiran.com, the gigantic Persian mansion, in five stories and five yard-gardens, is quite an exquisite example of traditional Persian designs and decorations. Featuring wall-to-wall varieties of intricately stunning stucco reliefs, paintings, muqarnas, and just about everything beautiful that’s ever been seen in Islamic architecture!

Abbasi House can be categorized into three main sections: The outer, inner and attendants’ section.

The ‘outer’ section refers to areas in which the host/hostess received guests. Such areas include the ‘mirror room’, the covered hall, iwan (balcony), alongside side se-dari (3-door) and panjdari (five-door) guestrooms.

The ‘inner’ section refers to the private living area of the owner. Following the Islamic principles of hijab, nowhere of the inner and outer sections of the house can be viewed from one another.

Among the two inner and outer sections is also the ‘garden’s yard’ which was an area for performing group prayers.
Last but not least, the attendants’ section. As you may have guessed from the name, this was living area for the all of the Abbasian’s servants and service workers. This section only leads to the main house through the kitchen.

It is said that the construction of the elegant Abbasi House took about 20 years to complete. Constructed in the late 18th century, it counts as a product of the Qajar Dynasty.

After the death of the first owner and the passing down of ownership, the Abbasi House is no longer a single residence. Rather than being one massive mansion, it has been divided into five big homes.

In the most recent years, four out of the five homes have been purchased and reconditioned.

Following its division and renovation, the four purchased-segments of the Abbasi House have undergone some change.
Two of them have been renovated in the Kashani style of traditional Persian architecture; with sunken-courtyards.

The third, having two-stories, is attached to a covered outdoor courtyard while the fourth, in essence being a garden, has been renovated as a traditional Persian yard. 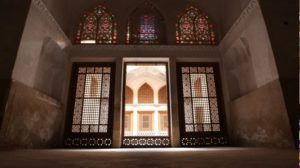 One of the first features that may draw the attention of any visitor while touring around the mansion is the sunken courtyard. The reasons for this ancient method of garden construction are as follows:

Since the past traditional Persian structures used the water from qanats, it was crucial for the different leveling to be included in architecture. This difference in planes permits better control of water pressure being dispersed all throughout the property.

Another reason behind the sunken courtyard is that it acts a form of insulation, working with the rest of the building, to regulate the interior temperature in the summer and winter seasons.

Lastly, something you may not have thought of is the use of the dug-out soil and rocks. Indeed, concurrently with the digging, brick ovens were constructed at the building site of the Abbasi House that converted the dug-out materials into building bricks!

The beautiful Home of the Abbasians doesn’t just boast its looks, but also its massive size. Having a 5,000-square-meter floor plan on a 7,000-square-meter property, the Abbassian’s house is no child’s playground. Except for that of the famous cleric!

The entire building of this ginormous mansion is perfectly symmetrical. If you were to picture a vertical line going through the center of the home, you will realize that each of the halves are exactly identical!

Contrary to contemporary styles of architecture, that show a lot of their intricacies on the outside, the Abbasi house is built in an introverted style. This means that the exterior of the structure fairly simple, yet leaving the interior to absolutely adorned the most beautiful and jaw dropping works of Persian art.

The last interesting feature of this residential palace is its Islamic considerations of hijab. The layout and design of the rooms, halls, prayer areas and every single inch of the property has been accounted for.

In every segment of the structure, elegant divisions of space are made in order to secure the privacy of the men and women. (As you may already know, unrelated men and women in Islam are forbidden from seeing each other without wearing hijab).

Having to consider this very fundamental need, the architect has created a very flowing, yet divided living space with rooms within rooms, perfectly and comfortably accommodating the visitors and residents.

The Abbasi House is such a dense collection of phenomenal traditional Persian and Islamic architecture and artwork. With an additional two beautiful badgirs (wind catchers) and two underground water wells there is just so much to see at this location. No doubt this is one of the most beautiful places in Iran! 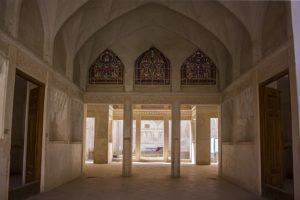