Abyaneh, an exceptional village 40 km northwest of Natanz in central Iran in the foothills of Karkas Mount is a tourist attraction famous for its ancient architecture and its many historical sites. 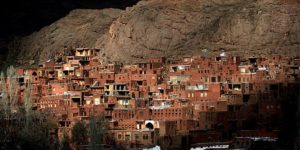 As a village of great antiquity, Abyaneh is like a living architectural and anthropological museum. It presents an impressive model of the man adoptation to the environment.

It is located in the northwestern foothills of Mount Karkas, 40 kilometers from Natanz, and 80 km in the south of Kashan in Isfahan province. It is 2,500 meters above sea-level. A road links Abyaneh to the main Kashan-Natanz highway in a region called Hanjan, which is 55 kilometers and 25 kilometers away from Kashan and Abyaneh respectively.

According to irantravel.biz, Abyaneh is mainly watered by Barzrud River. Set in the foothills of the lofty mountain of Karkas, this village has a cold climate with numerous springs creating a favorable condition for agriculture.

Given the evidence found in Abyaneh, the village dates back to antiquity, but its golden age was during the Safavid era. The word ‘Abyaneh’ has been derived from the word ‘viona’ meaning ‘Willow Grove’ (in the local dialect ‘vey’ means willow). 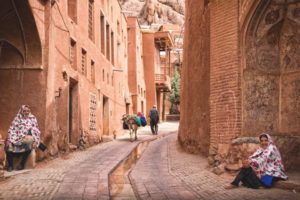 The village extends along the river. Although the village itself is situated on high grounds, in the past three castles were built to protect the people from enemy attacks. Furthermore, the configuration of Abyaneh protects it from strong wind and flood.

Abyaneh has a compact texture with narrow and steep alleys. Located on the slopes of the mountain, the houses are arranged in a stair-step shape, so that the roofs of some houses are the yards of others. Timbers, straw and clay have been used for building the roofs. The walls, built from red mud bricks are impressive. The mud bricks harden when they are exposed to rain. The houses have been built facing the east to get the maximum sunshine.

An impressive aspect of Abyaneh’s architecture is that the houses are uniform in appearance. The doors, most of which have two knockers, are wooden and built in traditional styles. There are beautiful patterns, poems and the names of the owners and mason carved on some doors. The poems demonstrate a good picture of the old Iranian culture. Many facades date back to the Safavid era. Beside the doors of many houses, there are small platforms providing places for passers-by or local residents to rest for a while.

The simplicity of Abyaneh houses presents a picture of the life in rural Iran. Each room is used for various purposes. For example, a single room may be used as a dining-room, a sitting-room, a bedroom and a guest-room. To make efficient use of fuel, the rooms used in winter are architecturally different from those used in summer. To provide equal lighting for all parts of the rooms, there are several small opening in the roofs. The size of the rooms, windows and doors all indicate the simplicity of life in this old village.

Abyaneh is called an entrance to Iranian history. In some of the houses there is earthenware belonging to a few hundred years ago. The local traditional clothes are examples of styles of great antiquity. It is said a women of Abyaneh has inherited her wedding dress from her grandmother. The language spoken by the people is similar to the Parthian language (an Iranian language of the Parthian people who were inhabitants of an ancient country to the southeast of the Caspian Sea, now a part of northeastern Iran).

In addition to natural beauties, there are several historical monuments in Abyaneh, of which the following are of greater significance, Iran Daily wrote.

This mosque is magnificently impressive. Many tourists believe Abyaneh is worth visiting even if it only had this monument. The sanctuary of the mosque has a wooden mihrab — a semicircular niche in the wall of a mosque that indicates the qibla; that is, the direction of the Kaaba in Mecca and hence the direction that Muslims should face when praying — around which there are eye-catching patterns and a chapter of the Qur’an carved on the wood. According to date inscribed on the mihrab, it goes back to the 14th century. There is also a pulpit with beautiful carved decorations dating back to the Seljuq era (1038-1194).

Situated in one of the most ancient neighborhoods of Abyaneh, this mosque has an impressive sanctuary. The date carved on the front door indicates that the mosque dates back to the 14th century. This is the oldest door found in Abyaneh, and its carved decorations are very similar to those of the mausoleum of Bayazid-e Bastami in Shahroud. 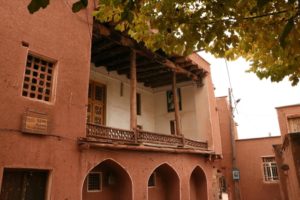 Located beside Mount Sakhreh Kuh, this mosque dates back to the Safavid era. Its sanctuary has pillars of wood, on which some verses of the Qur’an have been inscribed. 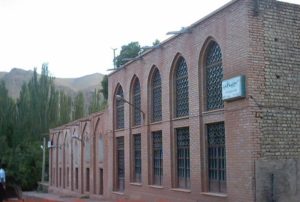 The fire temple of Abyaneh is one of the big Zoratorian temples which are build in a mountainous area. 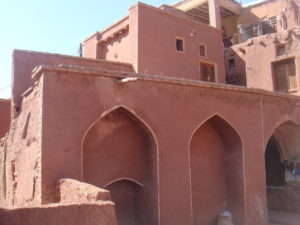 The shrines or the mausoleums of Prince Issa and Prince Yahyya are located in the south of the village. Issa and Yahyya are said to have been Imam Mousa Kazem’s sons. 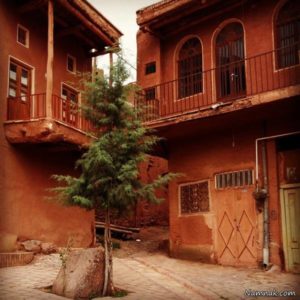