Ziggurat of Choga Zanbil, the world’s largest ziggurat is located in Shush; a city in Khuzestan Province, southwest of Iran. It was the first Iranian monument to be registered on the UNESCO World Heritage List in 1979. 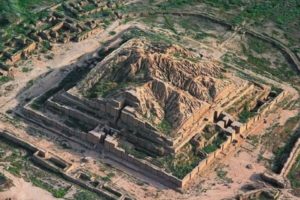 Ziggurat of Choga Zanbil is located approximately 30 km southeast of Shush and 80 km north of Ahvaz. It is an ancient Elamite complex in Shush; a city in Khuzestan Province, southwest of Iran. Shush is located beside ancient Susa; an ancient city of the Proto-Elamite, Elamite, First Persian Empire, Seleucid, Parthian, and Sasanian empires of Iran.

Ziggurat is a type of massive structure built in ancient Mesopotamia. They were built by ancient Sumerians, Akkadians, Elamites, Eblaites and Babylonians for local religions, predominantly Mesopotamian religion and Elamite religion. Ziggurats have the form of a terraced compound of successively receding stories or levels. They were the site of keeping statues of gods and performing religious ceremonies. 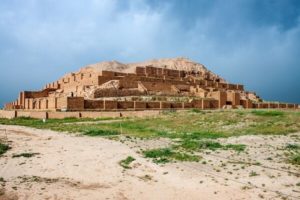 Ziggurat of Choga Zanbil was built by the Elamite king Untash-Napirisha (1275-1240 BCE) as the religious center of Elam. He ordered to build a religious city where the Choga zanbil building was located in the center of the city and was considered the highest part of it. The entire complex consists of the magnificent Chogha Zanbil ziggurat, temples and three palaces. It originally measured 105m on each side and about 52m in height, in five floors, and at the apex of which stood a temple. Today, it is 25m high and only two and a half floors of it have remained.

In 1890, a person named Jacques de Morgan; a French mining engineer, geologist, and archaeologist, made a statement stating that there were oil mines in Choga Zanbil lands. For a long time the place was unfamiliar to people, but it was accidentally discovered in 1935 by prospectors of the Anglo-Iranian Oil Company during an oil searching project. A number of engineers found a brick on which it was written. 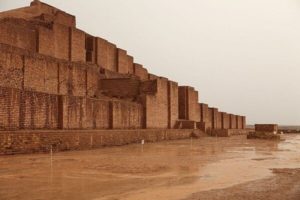 Several bull sculptures of Inshushinak were found within the complex, which served the royal families of Elam as a place both of worship and of interment. In addition, a variety of small artifacts were recovered, including a collection of Middle Elamite cylinder seals.

Chogha Zanbil is a local word made up of the two Chogha meaning hill and Zanbil meaning basket. It is an ancient name for this structure and it means basket mound. 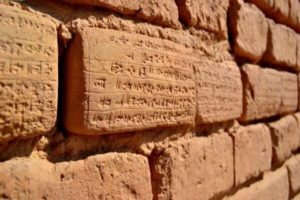 Choga Zanbil’s building is a square shaped circular fence around it. The number four is a sacred number in architecture. “Four” indicates of the four main directions, four seasons, the sides of the square, and etc.  There are bricks to the cuneiform (one of the earliest systems of writing which was invented by the Sumerians) on the walls of the temple; all of them have the same text which expresses the name of the king and his purpose to build the temple.

It is is considered to be the best preserved example of an ancient construction in the world. Chogha Zanbil became the first Iranian site to be registered on the UNESCO World Heritage List in 1979. 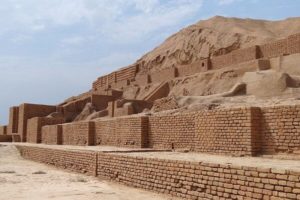 The best season to visit Ziggurat of Choga Zanbil is winter. It is not a favorite destination in summer since it gets so hot. Visiting this ziggurat will take one hour.