Singapore’s ambassador to Iran in a meeting with Iranian cultural heritage officials called for cooperation between the two countries’ museums.

Non-resident ambassador of Singapore Ong Kong Yong at a meeting with deputy head of Iran’s Cultural Heritage Mohammad Hassan Talebian, Chief of the National Museum of Iran Gebraiel Nukandeh, Ambassador of the Islamic Republic of Iran to Singapore Javad Ansari and representatives of the Foreign Ministries of two countries as well as representative of the Office of International Affairs of Cultural Heritage organization of Iran met and talked at the venue of the National Museum of Iran.

Other areas of cooperation included launching the Iranian Studies Center at the Museum of Asian Civilizations in Singapore, launching tourism consortium between the Islamic Republic of Iran and the ASEAN Union, welcoming the presence of Singaporean investors to enter the tourism field and investment in hotel and infrastructure construction, forming a joint tourism committee and declaring readiness to hold mutual cultural weekly tours and food festivals between the two countries.

Yong, also a former secretary general of ASEAN, welcomed and confirmed the need for the development of bilateral relations, especially cultural interactions, and said, ‘He would address the cases to the relevant authorities in Singapore.’ 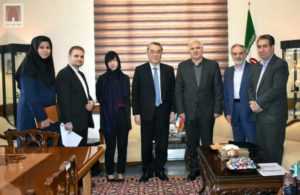