Deputy Head of Iran Cultural Heritage, Tourism and Handicrafts Organization (CHTHO) Pouya Mahmoudian said that a world tourism center, as proposed by President Rouhani, will be established in Iran. 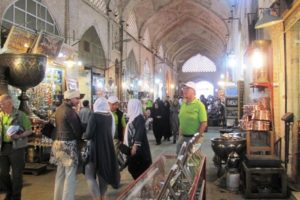 The United Nations World Tourism Organization (UNWTO) has approved Iran’s proposal for the establishemnt of a global center to link handicrafts and tourism in Iran, CHTHO deputy head said on Sat., adding that the center will be administered under the strict supervision of the UNWTO.

The proposal was made during the last week’s visit of Zurab Pololikashvili, the UNWTO Secretary-General, to Iran.

After lengthy discussions and intensive talks, the proposal was approved with the aim of deepening the links and closing the gaps between handicrafts and tourism in Iran, Mahmoudian added.

In this regard, the first International Handicrafts and Tourism Conference will be held in Tehran next year in the presence of representatives of WTO’s state members.