Sarein a city in Ardabil Province, Iran is one of the most beautiful Iranian cities with pristine nature and pure climate that lies at the foot of Sabalan Mountains. It is a natural spa region with numerous hot mineral springs well-known for their therapeutic values.

Spectacular Ardabil Province located in the northwest of Iran bordering the Republic of Azerbaijan is one of Iran’s most scenic provinces. Beautiful nature, green plains, and hot mineral springs in Ardabil Province creates pleasant memories, and visiting its historical monuments as well as its villages brings energy and enjoyment along. 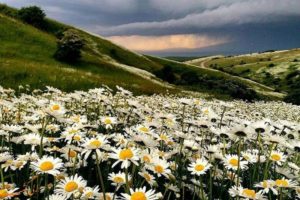 Sarein or Sareyn is a small city in the west of Ardabil with an area of ​​more than 1.28 square km. It stands 28 km from Ardabil. The city is famous for its numerous spa springs and one of the tourist areas in Ardabil province.

Sarein attracts more than five million tourists annually who travel to this region from different parts of Iran and the world because of climate and hot springs. There are nine hot springs which are very different in terms of composition and properties.

The word Sarein in the Persian dictionary means “cool place” and “headwater”.

The main language of Sarein is the Azeri, however Persian is the official national language.

‘Ashe Doogh’, also known as ‘yogurt soup’ is one of the traditional soups in Sarein. It is a soup usually made from yogurt or doogh, as well as chickpeas and vegetables.

Local ‘Kebabs’ in this area are also very popular and delicious for tourists.

‘Doogh’ or ayran; a classic Iranian drink which is a combination of water, yogurt, mint and salt.

“Honey” which is produced locally by the bee keepers of the region is one of the famous things in Sarein. It is produced on the hyacinths, basil and vetches slops of Sabalan Mountains. It has been renowned for its quality.

Sarein is famous for its numerous hot springs which causes many tourists travel to this city every year in summer. ‘Gavmesh Goli’ hot spring; one of the popular hot springs in Sarein is very useful for the treatment of general, women and heart diseases, as well as general strengthening of the body.

Sarein hot springs are as follows: 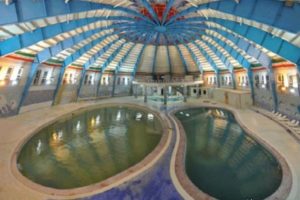 Another attraction of Sarein is ‘Goorgoor Waterfall’ which is located 10 to 15 kilometer from Sarein. It is 12m high and it is located in the northern slopes of Sabalan Mountain. It attracts many nature lovers to the Ardabil province.

‘Kanzag’ is a historic village in the Central District of Sarein. It has historic caves related to the Parthian period which have been registered in Iran’s National Heritage. 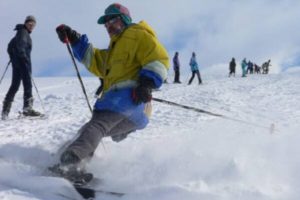 ‘Alvares’ is a ski resort located 24 kilometers away from the city of Sarein. Many tourists travel to this area to ski and also enjoy winter sports every year.

‘Anahita Hill’ in Sarein was once called Water Goddess, it has been discovered on the basis of excavated earthenware and historical documentation.

‘Gulistan Valley’ is one of the widest and most beautiful valleys in Ardabil province. It is Sabalan’s east vally and habitat of partridge, goat and mouflon.

‘Vargehsaran waterfall’ is one of the most spectacular spots of Sabalan’s green slopes. 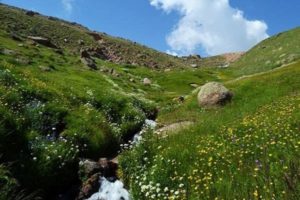 The best season to visit Sarein is late spring and summer. It is not a favorite destination in autumn and winters since it gets so cold. The minimum temperature is -8° C and the maximum 25° C in Sarein.