The Tehran Auction grossed over 420 billion rials (over $10 million, $1=42000 rials) during its 11th sale on Friday at the Parsian Hotel in Tehran as 65 percent of the artworks were sold at the minimum prices estimated. 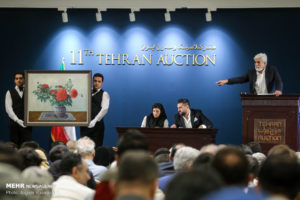 The Auction, which was launched as a private initiative in June 2012, held its 11th edition at its usual venue at the luxurious Azadi Hotel in northern part of the capital on Friday evening. The place was already jammed-packed when the Auction went underway at 19:00, with some bidders having to remain standing for the entire duration of two and a half hours. As many as 800 people were present in the room, including 140 registered bidders.

In this edition, a collection of 79 classic and modern artworks by 60 artists went under the hammer, generating a record high of 42.204 billion tomans ($10,048,571 at official rate and $3,836,727 at market rate), driving the total sale up by almost 35% compared to the last Auction of both classic and modern art in June 2018. Although a one-billion-toman-priced work was removed from the collection (an Untitled mixed media on paper by Hossein Zenderoudi), six works did not sell, and some were sold at the reserve price, the total proceeds still registered a record high, due to as many as 12 works hammered at over one billion tomans.

The atmosphere of the Auction last night was perhaps a little more subdued than the 10th edition in January, with bidders being extra cautious and contemplative while raising the bid, especially on works that were priced at over one billion tomans. The shock of the event was when the final bidding on a work by Mohammad Ehsai, a contemporary artist whose work is characterized by a melding of Arabic calligraphy, graphic design, and modernist abstraction, did not reach the reserve price of 1-1.5 billion tomans, and thus was not sold. 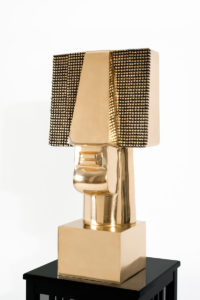 The most expensive piece sold at the 11th Tehran Auction was ‘The Poet’s Head’ by Parviz Tanavoli (b. 1937), a bronze sculpture made in 2011, which was hammered at 3.2 billion tomans, roughly $7.6 million (OR)/$290,910 (MR). Tanavoli is a well-established name in auctions – domestic and overseas –  whose bronze sculptures are characterized by combining the semiotics of Persian and Arabic language with the formal language of abstract sculpture. 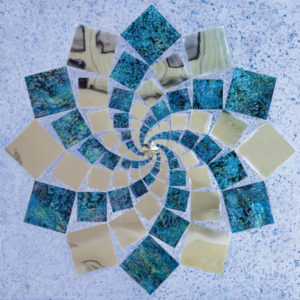 The next most expensive work was an Untitled mirror mosaic piece by Monir (Shahroudy) Farmanfarmaian(1922-2019), executed in 2017. The work was sold at 3 billion tomans, roughly $7.1 million (OR)/$272,728 (MR). Farmanfarmaian, the highly prolific artist who was best known for her mirror mosaics and geometric drawings that set records at Tehran auctions, passed away at the age of 97 this April. The collection last night included two more works by her; ‘Blue Sky’ (2005) which was hammered at 2.1 billion tomans (the fourth highest-priced work), and an Untitled watercolor painting of a vase of flowers (1966) which sold at 340 million tomans. 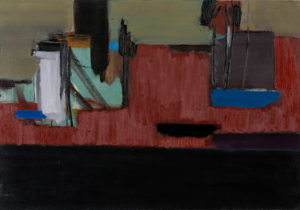 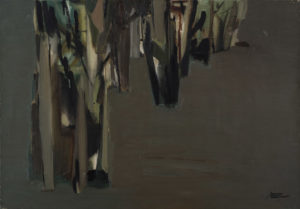 Another work by Sepehri, an Untitled oil painting executed circa 1960s, was the fifth highest priced work at the Auction, sold at 2 billion tomans. The work belonged to Dr. Mohammad Ali Movahed’s private collection, and was offered at the São Paulo Art Biennial in Sep. 1963, Brazil. The proceeds of the sale of this work was said to be donated to the Safaye Omid Art and Culture Institute in the Iranian city Tabriz, for the purpose of building a school and public library and for granting scholarships to honor students. 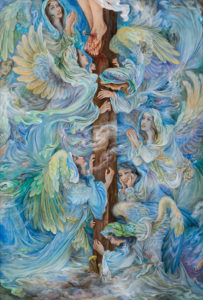 The sixth most expensive piece was an Untitled gouache and watercolor painting by Mahmoud Farshchian (b.1929), who is known worldwide for his miniature paintings. The work, depicting the crucifixion of Jesus Christ, was sold at 2 billion tomans (roughly $4.7 million/$181,819). 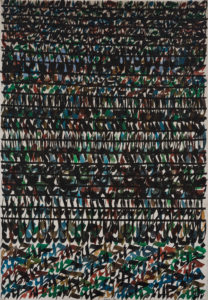 Although one of Zenderoudi’s works was removed from the collection, another oil painting by him, ‘SINE+LAME’ (1970), sold at 2 billion tomans. The artwork was used as the face for the Auction’s catalogue.

Other notable sales include a metal sculpture by Jazeh Tabatabai (1930-2008) sold at 1.6 billion tomans.

An oil on canvas triptych titled ‘Galactic Destruction’ by Aydin Aghdashloo (b. 1940), hammered at 1.6 billion tomans. 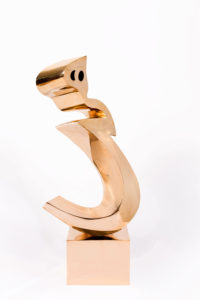 an impressive artwork of oil on aluminum mounted on fiberboard by Behjat Sadr (1924-2009), hammered at 1.5 billion tomans, and a beautiful mixed media on canvas artwork by Masoud Arabshahi (b. 1935), which sold at one billion tomans.

Other works were hammered at under one billion tomans. The least-priced work sold at the Auction last night was an Untitled mixed media work by Jamshid Samavatian (b. 1938), hammered at $40 million tomans ($95,239/$3,637).